Nate's Jeep is currently parked, but 95% painted and reassembled. I'm actually quite happy with how it's all turned out, and I'm looking forward to him racing around the backyard in it later this year. 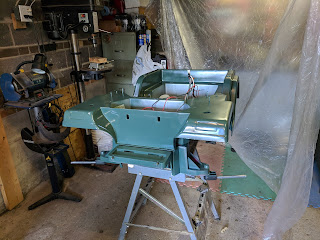 Here's the Jeep after the first coat of paint. All the accessories were being painted in my "paint booth" (aka, large cardboard box) 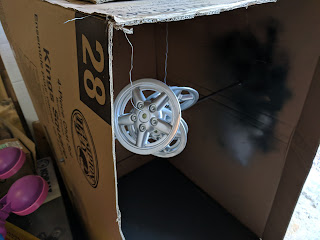 Adding some "Bling" to the Jeep. I wanted to go with the military motif, but decided a resto-mod look would be suitable. So a little chrome here and there won't hurt. I know "Chrome won't get you home", but really, who doesn't like a little bling bling on their ride. 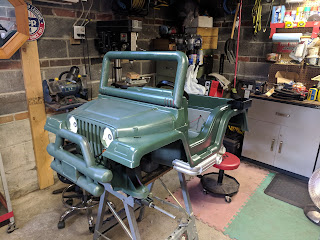 Here it is during reassembly. You can see, I went with a little more bling on the mufflers out the side. 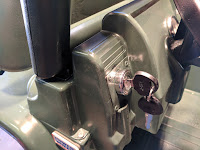 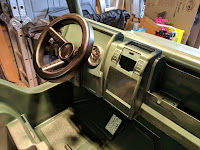 Just a couple of shots of the inside coming together. I had to make a mounting plate for the ignition, as it just wasn't working with being mounted to the plastic. You can see the working voltmeter in behind the steering wheel. 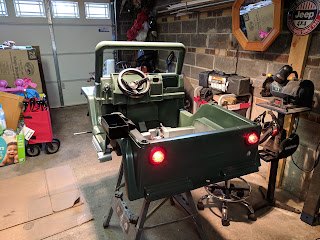 Here's the shot from the rear with the bullet taillights. I really like the retro look of these, and they fit the resto-mod aesthetic perfectly. 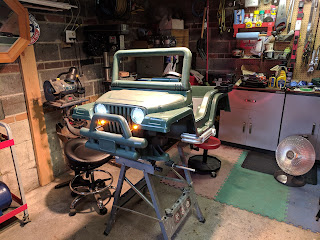 Here's the front end lit up. I don't think I could've done a better job on capturing the look of a CJ.

The tires are painted black, but I'm not sure if they'll hold up, so new ones may be in store. My wife isn't sold on the all OD paint job, so I may bling up the front bumper to make it stand out a bit.

So, look forward to an update in a few months with a new video of Nate test driving Pavement Stinks.
Posted by Kevin at 19:31 No comments: