While browsing for old, affordable(Ha!), Jeeps, I came across an ad for Jeep m38 CDN (A Ford built, Canadian Jeep). It included a bunch of tools, spare parts, and had been partially restored, only needing brake lines, electrical, and a fuel system (yeah, right). The price was too good to pass up. The downside, it was around 3.5 hours away from me.
After approval from the CFO (my wife), and a few messages back and forth, a deal was struck. I had agreed to buy a sight unseen, 69 year old Jeep. Next I had to figure out how to get it home.
Originally, I was going to rent a U-Haul truck and trailer, however my dad stepped in and offered himself, and his F250.
This in of itself worked out well. It gave me a day to catch up with dad, enjoy some good music, and the open road. Due to the ongoing pandemic, I've practically never left my home, and have really only been interacting with my wife and son. It was nice to have a days break from that routine. 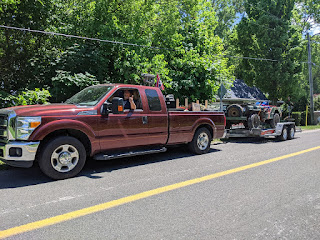 Two days after the deal was made, we were on the road at 7am to get my Jeep. We picked up the trailer near the sellers location, and made our way down to meet the him. He was an incredible person to deal with, and felt like a guy I knew for years right off the bat.
I fully underestimated the amount of extra "stuff" that was included in the deal. It worked out to a full workshop worth of tools, spare and new Jeep parts, a second engine and transmission. To sum it up. It took about two hours of loading parts and tools, plus a Jeep, before we were back on the road.
Dad's truck had no trouble with the load, and comfortably cruised home without breaking a sweat. I had much more confidence in his truck, than any U-Haul truck I would've rented.
We were back in my driveway around 6:30pm. The Jeep was unloaded and man handled into its temporary parking spot, another hour of us unloading parts and tools followed.
With that, I'm the proud owner of one of only 2300ish Ford built m38's. It's originally from New Brunswick, but registered in Ontario now. 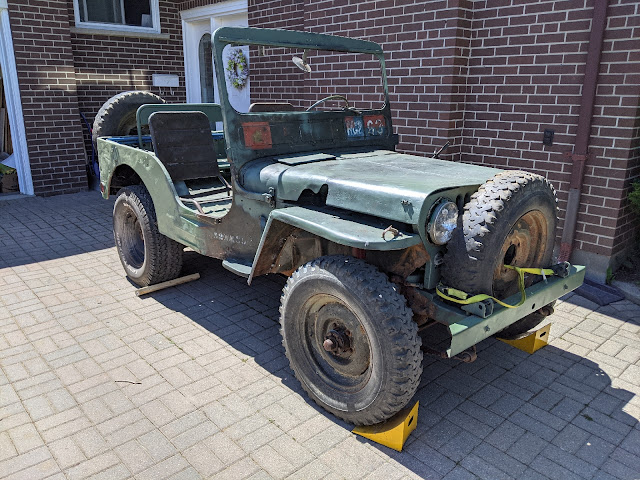 I guess it can be said, that I'm into my mid-life crisis, and this is my "little red corvette". Is it a practical vehicle, no. Is it a wise outlay of money, hell no. Does it make me smile ear to ear, absolutely.
Posted by Kevin at 13:30 No comments: 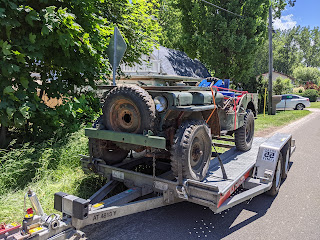 Got some planning to do, and some work to do, but I'd like to introduce you to a yet to be named new Jeep in my life.

As it sits, the body has been mostly restored. It needs brake lines, fuel lines, and an electrical harness done up for it.

Keep checking in for updates, and hopefully some YouTube videos, as I bring this piece of history back to life.