My little guy was starting to climb out of his crib (low muscle tone due to Down syndrome my ass). My wife and I decided it was time to roll in his "Big Boy Bed". 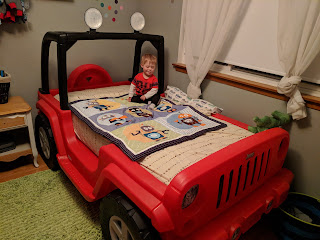 It's a Jeep JK bed we bought when he turned one. Now that he's nearing three, it was time. The crib just wasn't cutting it. Not to mention, I actually caught (as in he was falling) him as he exited the crib and lost his footing. 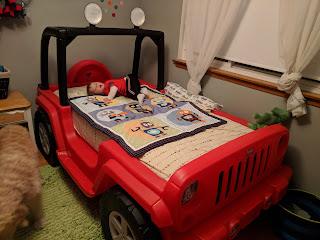 The bed was easy enough to put together, but at times it did need two people two hold things in place while screws were used.

I swear it's probably the same physical size of a Willys CJ2a, but whatever, it's cool, and my son seems to love it. 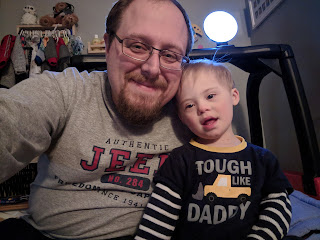 I'll give it credit. I'm not a small guy, but it holds both of us quite well, and all the lights work to boot! My little guy loves turning them on and off, and hanging out on it while watching The Wiggles, Paw Patrol, or while I read him his favorite book "Sheep in a Jeep".
Posted by Kevin at 21:16