I'll start with the big disclaimer. All products or services in this post are self purchased/downloaded. I receive no compensation for any product/service. I feel that this is the best way to remain unbiased and honest when reviewing. 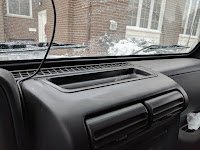 While the TJ really improved on actually giving Jeep owners a dashboard, the included tray for holding things isn't all that deep or useful. I decided that if I was going to be spending more time exploring the in the Jeep, I'd need a dedicated mount for a phone/tablet/GPS. 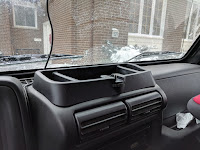 Enter the Rugged Ridge Dash Multi-Mount (Model 13551.19) and the Ilyever 2-in-1 Universal Tablet iPad Tripod Mount Adapter. The mount comes with a universal cellphone holder that seems to rest on all the buttons on my phone. However, it's a standard tripod screw mount, meaning any tripod accessory will work. 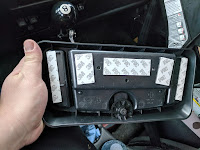 Installation is a snap. I started by cleaning the dash tray with some WD40 to ensure all dirt, oil and grime were removed. The first step is to attach the included 3M tape to the base of the Rugged Ridge unit. Once done, place and press the try into place on the existing tray. 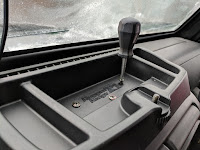 Install the three self tapping screws directly into the stock plastic tray, and well, you're done. I had to use a stubby screwdriver as my mirror and dash cam were in the way of my full size screwdriver. Once done, the unit is solidly in place. 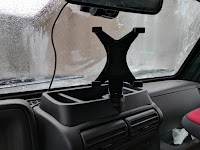 I added the tablet holder to the mount, and there you go. It's easy to remove the mount and replace with cellphone or gps mount, or just leave it off altogether if you don't want to advertise. The mount seems solid enough. Being the dead of winter, and most of the trails being closed up this way, I won't be able to speak of how it holds up until I can get some wheels in the dirt this spring/summer. (See my update to the mount here ) 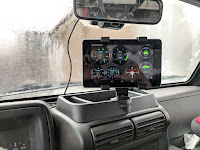 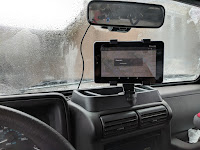 I'm using a first generation Nexus 7 tablet with some great apps that I've found, and a bluetooth ODB adapter. I've had the Nexus 7 since launch, and lately it's been sitting in a drawer making me wonder what I should do with it. Guess I answered my own question

Apps that I've loaded, aside from the stock Google Maps, are as follows (all hot linked)


I have used GPX Viewer and Torque Pro for a while now and can definitely speak to their usefulness. GPS Status, Essentials, and MapFactor are new apps I'm trying out. They all look like they work well, I think they'll find a permanent place on my device.