In one of those, "I didn't know that was a thing moments", I learned that Jeeps have door hinge liners. The reason this is new to me, is simply because back in my YJ days, no one actually complained about the hinges on their YJ's and CJ's. It was just expected that they were always buggered up and the doors were always hard to remove as a result.

Enter the past couple years, and while my TJ doors still came on and off easy enough, they were sagging when opened, making funny noises. You know, just typical Jeep door things. I was throwing lube at them (like my YJ) and that seemed to work. Until I discovered that they actually had liners, liners that are prone to rotting out, and liners that were replaceable. 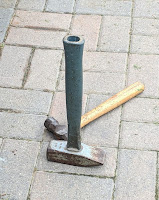 TMR Customs makes some Delrin Door Hinge Liners  for all modern Jeeps. You can even order them with a removal tool. A tool I highly recommend getting.

Start by taking your doors off. Should go without saying. Line up the removal tool, and start hammering away. My bottom hinges were badly rusted in place, so I had to break out Mjolnir to, uh, convince the liner to come out.

Once the  liner is out, hit the hinge with a rolled up piece of sandpaper to clean out any gunk, lube up the new liner (I used silicone spray lube) and push it in. It'll be tight, but the key here, is do not use a hammer.
New liner in place, looks much better than the old one, and I'll tell you, the door doesn't sag any more. Smooth like butter. 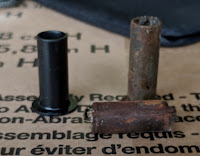 Here's a shot of my old upper and lower next to a new liner. Start to finish was about 30 minutes, and that was with fighting the lower liners out.