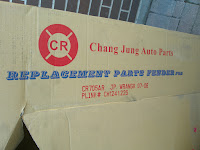 Rust, every Jeep owners other four letter word. My front fenders finally got to the point where I was running out of good metal to attach new metal to. I came across a local supplier selling replacement fenders for $140 a side. They're imported, solid enough, and came primed in a solid black. As I would come to learn, they fit damn near perfect. More on that as we go on. 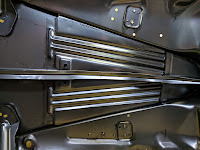 Part of what causes TJ fenders to rot out so badly, is the support brackets lack any proper drainage. This allows dirt and grime to collect, causing the fenders to rust out from the inside out. To counteract this, I've drilled holes at each end. Just a 1/4" to allow water to drain. Hopefully that keeps them healthy for a long time. At least for the same 18 years my old ones lasted. 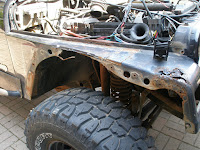 You can see by the pictures to the right the brackets I'm talking about, and the lower picture shows the damaged area. That's the typical TJ fender rust. In my case, the rust had practically eaten through the entire centre of my fender. It was held together with some old ducting and rivets. 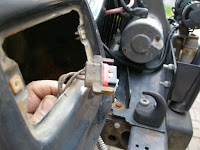 The start of a project this grandiose, is realizing that it's not just 11 bolts and you're set, but it's all the accessories that are on the fenders that need to be dealt with. Lights, wiring, bottles, airbox, battery, battery tray, weird drivers side battery tray. Just a lot of detail work.
I started with the simple stuff, removing the lights and wiring for them. The front signal lights come out with two torx screws. Followed by two clips to free the housing. This is key, as the light socket won't fit through the fender hole with the wiring harness. 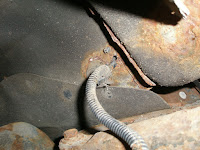 The side marker sockets just need a twist to remove them from the housing. Trace the wire back and remove all the plastic trim clips. Ultimately back to the fender hole. 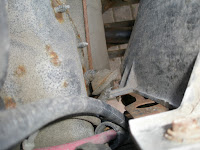 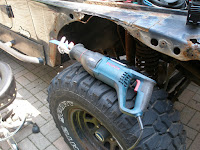 I got tied up with the work, and didn't take photo's of removing all the screws for the air box and electric distribution centre. Also, now's a good time to remove the battery. Just get it out of the way.
Basically, remove everything that's attached to the fenders.


As mentioned, there are 11 bolts total. 7 at the front of the fender, where it meets the grill. Those pretty easy. Now comes the tough ones, especially on 19 year old Jeep. The best solution is to break out the reciprocating saw. Give it a clean cut to free the front of the fender from the Jeep. Now it's easy to get an impact gun with extension on the 4 fender to tub bolts remaining. 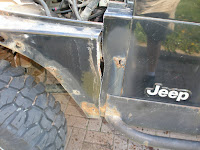 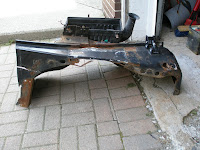 Keen eyes will notice that these are different fenders. Guess I wasn't quick on the camera while doing this. Regardless, it gives you an idea of where I did the cut.

It should be noted at this point, I worked around the battery tray on both sides. Removing them was going to be a pain in the butt, and working around wasn't too difficult. If your Jeep isn't as rusty, give it a shot. It'll make life easier. 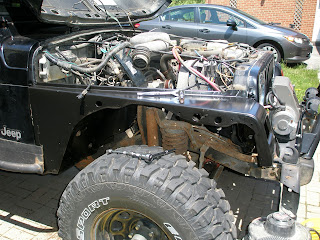 So by now, you're just over an hour in, and it's time to put the new fender on. Guess what, do everything you just did, but backwards, and you to can have a fender that now looks like this.
It's not a hard job. I may have used an impact and air ratchet, but there was nothing stopping me from just using hand tools. So this is definitely a driveway do-able job. Be prepared for broken bolts, and plan for two days.
Also, expect to need to drill a couple holes. Over the years some accessory mounts changed, and things didn't always line up. It wasn't a big deal, just worth noting. 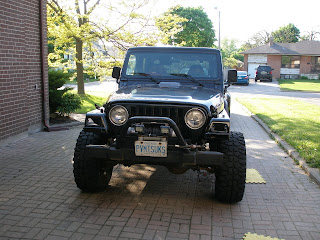 All said and done, 7 hours later, you can have fenders that look like this

And ultimately, once the flares are back on, lights back in place, and all accessories back in, you'll have a front end that will look like this. 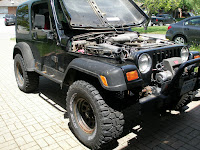 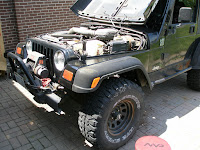