Today was the day, the Jeep m38 was finally at a point where I was ready to try and start it up. I have spent the past few (cold) winter months slowly rebuilding the carburetor as I had time. This weekend we shipped my son off to his Grandparents, allowing me much more time in the garage. I fired up the propane and electric heat, plus the overhead halogen lights, and got to work. 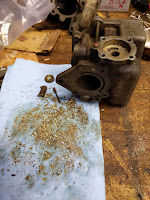 I started by finishing off the carb build, and plumbing in enough fuel line to get a small tank hooked up to the pump, through a filter, and into the carb. Sadly, the pump seems to be shot, but I have a new in box one to go in.

The carb took a bit of work, being 70 years old and all. The metering valve and needle did not want to come out. It involved a lot more drilling than a carb rebuild should require. 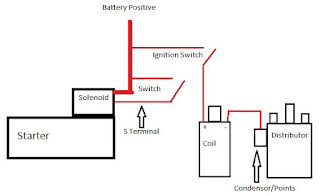 Some wires were run to hook up the starter with a trigger start and a makeshift switch to the distributor.
10 Gauge wire is recommended for all wiring except for the battery to starter, that should be 1 gauge. I went a little overboard (See my battery cables here: The Jeep Garage: Slow and steady Jeep m38 Progress)

I put a bit of two stroke fuel into the carb, and used some starting fluid to get it to pop off once. It was enough to convince me that we have a viable engine. It needs some work to button it up, and probably a head gasket (coolant in the oil), but it turns over, has spark, and enough compression to pop.

And without further ado, a VERY short video of me pulling the trigger... so to speak.