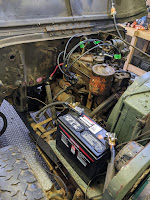 With the weather being nicer, and having a bit more free time as my son is able to entertain himself longer, time spent on the m38 is increasing. As more time is spent working on it, ambition and excitement continues to build, pushing me to spend more time working on it.
I started off with finally picking up a battery. That in of itself was an easy enough task, well, as easy as a trip to Costco on a Saturday morning can be. 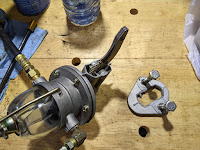 All was going well in the garage after getting the battery hooked up. I got the oil filter housing back on, checked the torque on the oil pan bolts, and then went to bolt on the brand new fuel pump. While tightening the two bolts for the pump the flange broke off. I was barely above hand tight, so a part of me believes the casting was flawed. I put a blank cover plate on and decided to just use a gravity feed bottle to get some fuel into the carburetor.

I managed to get the engine to pop a couple times, and it was about that time that I realized that I had not yet hooked up the oil pressure gauge. So the positive is that the engine makes oil pressure, the negative, is I squirted some oil out the side of the engine. I have an oil pressure test kit that I need to hook up before trying that again. 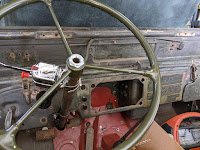 Taking a break from the engine (I had actually forgotten that I owned the oil pressure test kit) I decided to start into the dash itself. I finished running the hand throttle and choke controls. Found the nut that holds the steering wheel on, and mounted all the gauges in the dash panel. That was pretty uneventful, but did require a trip to Princess Auto for some terminal connectors. Not that I need much excuse to zip on down to Princess Auto.
Oil pressure lines for the dash are on order now, and with more open weekends ahead, I should be able to continue plucking off these small tasks, because any progress is still progress.