If you've been around a while, you may have read my last update from April. (Right here) 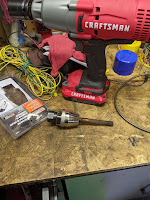 I outlined how I discovered antifreeze in my oil and decided a new head gasket was in order. A job that should take a couple hours at best on a flat head turned into a multi-week ordeal. Not being my full time job, meant I had to tackle this as time permitted, and like more things on Jeeps, it kinda snowballed.

I wound up purchasing a stud remover, and asking the stuck stud to come out nicely with it. Which it did, so that's a win, and I did get the head removed. Much to my surprise, the pistons looks great, the block had no surprises, and everything was generally in order. Well, except when I drained the oil. 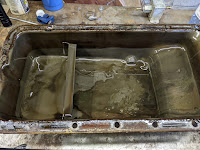 The drain opened and started with green, followed by milkshake brown, then some actual oil, and then sludge. Lots of sludge. As much as I didn't want to, the oil pan was coming off. In it, I found a 1/4" of goo. It took a bit of time and some brake cleaner to get it to come out. Followed by cleaning up the pan and getting it spotless. 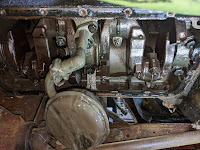 I had to order in some more gaskets (note to future shade tree engine rebuilders, order the full gasket set at the start). 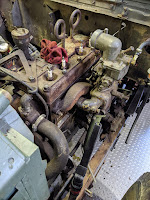 Ultimately, the oil pan went back on, the valve cover got a new gasket, and the head went back on with it new copper coated Fel-Pro gasket.

I have a set of new spark plugs, and we're just about down with that easy head gasket replacement. Next I need some high-zinc oil, some engine flush, and that should be it. Hopefully.

The tunnel is a long one, but I can see some light twinkling at the end.

As a small bonus for making it this far, here's the open engine turning over in all it's four cylinder glory. Something about being able to see everything running with the head off. Must be a flat head thing.