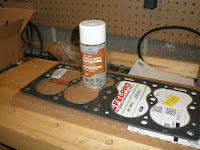 After my attempt to start the old Jeep, and my discovery that there was coolant coming out the oil pressure port, I started sourcing a new head gasket.

Everything arrived over the past week, and I found a local source (NAPA) for copper head gasket spray.


Knowing that it's supposed to be pretty easy to swap out a head gasket on these Go-Devils, I dove in. Surprisingly, it went smooth through removing accessories and head nuts/studs (some studs came out, as expected).

It was when I went to pull the head that I ran into troubles. It simply didn't want to move at all. Queue three hours of prying, hammering, heating, and using copious amounts of PB Blaster. Still no go, but there is movement now. The head is stuck to one stud that refuses to release it's grip.
After exhausting my arms (they feel like wet noodles now), I decided to call it a day. I got the head nice and hot around the stud, and tried to get as much PB Blaster down the stud to try and get it to release. I'll spend the week heating, spraying, prying. I'm sure I'll win, eventually.
Posted by Kevin at 17:11